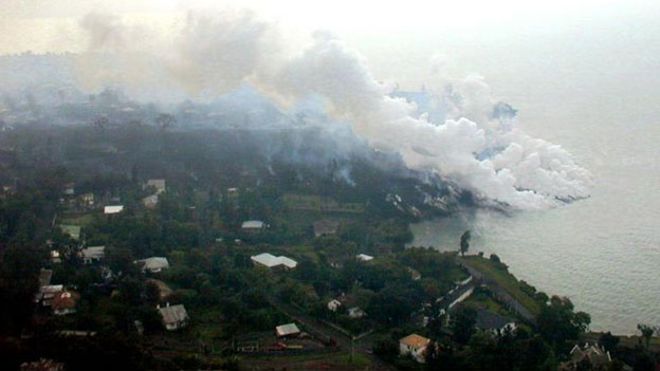 Lake Kivu is one of the African Great Lakes. It lies on the border between the Democratic Republic of the Congo and Rwanda, and is in the Albertine Rift, the western branch of the East African Rift.

Lake Kivu is a fresh water lake and, along with Cameroonian Lake Nyos and Lake Monoun, is one of three that experience limnic eruptions. Around the lake, geologists found evidence of massive biological extinctions about every thousand years, caused by outgassing events. The trigger for lake overturns in Lake Kivu’s case is unknown, but volcanic activity is suspected. The gaseous chemical composition of exploding lakes is unique to each lake; in Lake Kivu’s case, methane and carbon dioxide due to lake water interaction with a volcano. The amount of methane is estimated to be 65 cubic kilometers. There is also an estimated 256 cubic kilometers of carbon dioxide. The water temperature is 24 °C, and the pH level is about 8.6. The methane is reported to be produced by microbial reduction of the volcanic CO2. The risk from a possible Lake Kivu overturn is catastrophic, dwarfing other documented lake overturns at Lakes Nyos and Monoun, because of the approximately two million people living in the lake basin.