Don Juan Pond, also called Lake Don Juan, is a small and very shallow hypersaline lake in the west end of Wright Valley (South Fork), Victoria Land, Antarctica, 9 kilometres (5.6 mi) west from Lake Vanda. It is wedged between the Asgard Range in the south and the Dais in the north. On the west end there is a small tributary and a feature that has been described as a rock glacier. With a salinity level of over 40%, Don Juan Pond is the saltiest known body of water on earth. 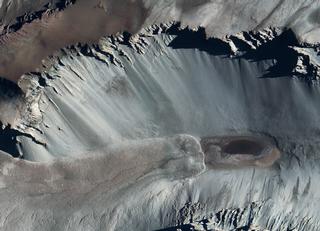 Don Juan Pond is a shallow, flat-bottom, hyper-saline pond. It has greater salinity than the Dead Sea or even Lake Assal (Djibouti) (the same is true for Lake Vanda and perhaps other lakes in the McMurdo Dry Valleys). It has been claimed that the salinity in Don Juan Pond is over 18 times the ocean’s salinity, compared to that of the Dead Sea at about 8 times that of the ocean. The fact that it is the only one of the Antarctic hypersaline lakes that almost never freezes is an indication of its top rank in salinity among the world’s lakes. It has been described as a groundwater discharge zone. The dominant ions in solution are calcium and chloride. The area around Don Juan Pond is covered with sodium chloride and calcium chloride salts that have been precipitated as the water evaporated. Area and volume of Don Juan Pond vary over time. According to the USGS topographical map published in 1977, the area was approximately 0.25 km2 (62 acres), However, in recent years the size of the pond has shrunk considerably. The maximum depth in 1993–94 was described as “a foot deep” (30 cm). In January 1997, it was approximately 10 centimetres (3.9 in) deep; in December 1998 the pond was almost dry everywhere except for an area of a few tens of square meters. Most of the remaining water was in depressions around large boulders in the pond.