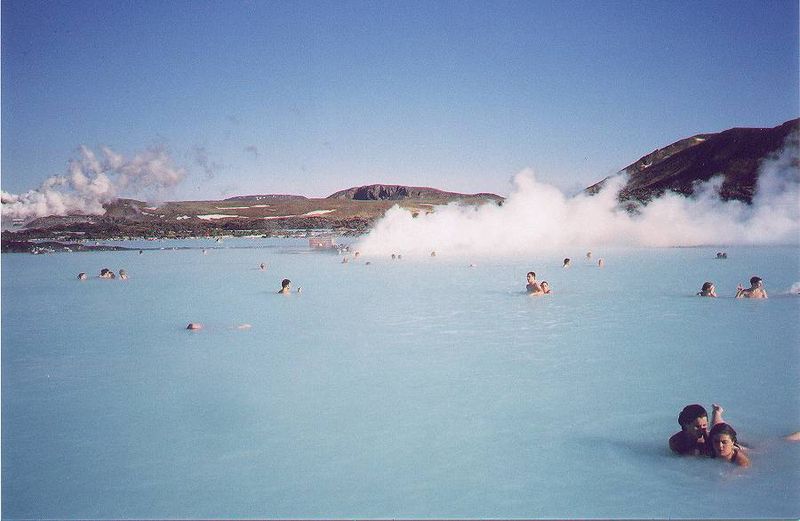 The Blue Lagoon geothermal spa is one of the most visited attractions in Iceland. The steamy waters are part of a lava formation. The spa is located in a lava field in Grindavík on the Reykjanes Peninsula, southwestern Iceland. Bláa lónið is situated approximately 13 km (8 miles) from the Keflavík International Airport and 39 km (24 miles) from the capital city of Reykjavík. That is roughly a 20 minute drive from the airport and a 40 minute drive from Reykjavík. The Blue Lagoon spa and geothermal complex is clearly visible from any of the usual satellite imagery sources at coordinates (63.880, -22.449). The warm waters are rich in minerals like silica and sulphur and bathing in the Blue Lagoon is reputed to help some people suffering from skin diseases such as psoriasis. The water temperature in the bathing and swimming area of the lagoon averages 37–39 °C (98–102 °F). The Blue Lagoon also operates a Research and Development facility to help find cures for other skin ailments using the mineral-rich water.

The lagoon is fed by the water output of the nearby geothermal power plant Svartsengi and is renewed every 2 days. Superheated water is vented from the ground near a lava flow and used to run turbines that generate electricity. After going through the turbines, the steam and hot water passes through a heat exchanger to provide heat for a municipal water heating system. Then the water is fed into the lagoon for recreational and medicinal users to bathe in.

Iceland has a strict code of hygiene and guests are required to shower without clothing in the communal shower area before and after bathing.

It is claimed that in June 2007 the Blue Lagoon appeared green, bewildering both residents and tourists of Iceland.