The Bermuda Triangle, also known as the Devil’s Triangle, is a geographical area in the Atlantic Ocean which has been made infamous for the many people, aircraft, and surface vessels said to have disappeared within its bounds. Many of these disappearances involve a level of mystery which are often popularly explained by a variety of theories beyond human error or acts of nature, often involving the paranormal, a suspension of the laws of physics, or activity by extraterrestrial beings. 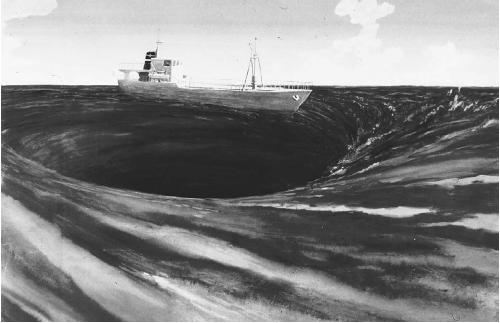 An abundance of documentation for most incidents suggests that the Bermuda Triangle is a mere legend built upon half-truths and tall tales from individuals who sailed the area, then later embellished on by professional writers. According to the Triangle authors Christopher Columbus was the first person to document something strange in the Triangle, reporting that he and his crew observed “strange dancing lights on the horizon”, flames in the sky, and at another point he wrote in his log about bizarre compass bearings in the area.

From his log book, dated October 11, 1492 he actually wrote: “The land was first seen by a sailor called Rodrigo de Triana, although the Admiral at ten o’clock that evening standing on the quarter-deck saw a light, but so small a body that he could not affirm it to be land; calling to Pero Gutierrez, groom of the King’s wardrobe, he told him he saw a light, and bid him look that way, which he did and saw it; he did the same to Rodrigo Sanchez of Segovia, whom the King and Queen had sent with the squadron as comptroller, but he was unable to see it from his situation.

The Admiral again perceived it once or twice, appearing like the light of a wax candle moving up and down, which some thought an indication of land. But the Admiral held it for certain that land was near…” Lawrence David Kusche, a research librarian from Arizona State University and author of The Bermuda Triangle Mystery: Solved (1975) has challenged this trend. Kusche’s research revealed a number of inaccuracies and inconsistencies between Berlitz’s accounts and statements from eyewitnesses, participants and others involved in the initial incidents. He noted cases where pertinent information went unreported, such as the disappearance of round-the-world yachtsman Donald Crowhurst, which Berlitz had presented as a mystery, despite clear evidence that Crowhurst had fabricated the accounts of his voyage and had probably committed suicide.

Kusche also argued that a large percentage of the incidents which have sparked the Triangle’s mysterious influence actually occurred well outside it. Often his research was surprisingly simple: he would go over period newspapers and see items like weather reports that were never mentioned in the stories. Kusche came to several conclusions: The number of ships and aircraft reported missing in the area was not significantly greater, proportionally speaking, than in any other part of the ocean.

In an area frequented by tropical storms, the number of disappearances that did occur were, for the most part, neither disproportionate, unlikely, nor mysterious. The numbers themselves had been exaggerated by sloppy research.

A boat listed as missing would be reported, but its eventual (if belated) return to port, may not be reported. The circumstances of confirmed disappearances were frequently misreported in Berlitz’s accounts.

The numbers of ships disappearing in supposedly calm weather, for instance, did not tally with weather reports published at the time. Some disappearances had in fact, never happened. One plane crash took place in 1937 off Daytona Beach, Florida, in front of hundreds of witnesses; a simple check of the local papers revealed nothing. “The Legend of the Bermuda Triangle is a manufactured mystery… perpetuated by writers who either purposely or unknowingly made use of misconceptions, faulty reasoning, and sensationalism.”