The bridge was the idea of a local official in the Chinese Communist Party who since has been dismissed for corruption. It was designed by the Shandong Gaosu Group. It took four years to build, and employed at least 10,000 people. It opened on 30 June 2011 for traffic. 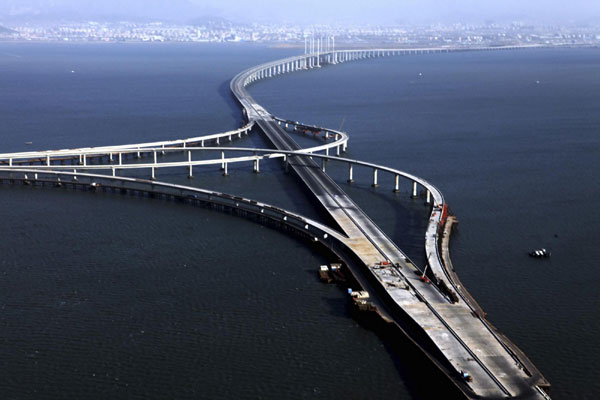 On the same day the bridge opened, the Qingdao Jiaozhou Bay tunnel opened. It transects Jiaozhou Bay, also connecting Huangdao District and the city of Qingdao, between the narrow mouth of the bay which is 6.17 km (3.83 mi) wide. The tunnel travels underground for 5.55 km (3.45 mi).

Concerns regarding the bridge’s safety were raised when Chinese media reported that the bridge was opened with faulty elements, such as incomplete crash-barriers, missing lighting and loose nuts on guard-rails, with workers stating that it would take two months before finishing all of the projects related to the bridge. Shao Xinpeng, the bridge’s chief engineer, claimed that in spite of the safety report the bridge was safe and ready for traffic, adding that the problems highlighted in the reports were not major. The bridge has few users and has been described as China’s “bridge to nowhere”. Built for a projected 30,000 vehicles a day, a year after opening it is only carrying 10,000.

The Jiaozhou Bay Bridge transects Jiaozhou Bay reducing the road distance between Qingdao and Huangdao by 30 km (19 mi) compared to the expressway along the coast of the bay. The design of the bridge is T-shaped with the main entry and exit points in Huangdao and the Licang District of Qingdao. A branch to Hongdao Island is connected by a semi-directional “T” interchange to the main span. The construction used 450,000 tons of steel and 2.3 million cubic metres (81×106 cu ft) of concrete. The bridge shall be able to withstand severe earthquakes, typhoons, and collisions with ships.It is supported by 5,238 concrete piles. The cross section consists of two beams in total 35 m (115 ft) wide carrying six lanes with two shoulders.