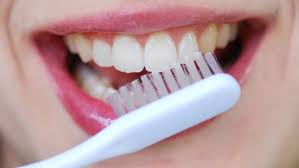 Brushing your teeth is something you probably do two or three times a day. But does that make you an oral hygiene hotshot? Could you be making brushing mistakes without even realizing it? Check out these eight common brushing Mistakes You Probably Don’t Know You Are Making While Brushing Your Teeth.

Ask the experts about the single most frequent mistake people make while brushing, and it’s that most of us simply aren’t doing it long enough. “To really thoroughly brush your teeth well, you should brush for about two minutes,” says dental hygienist Jacki Blatz, owner of Dentique Dental Hygiene Centre in Fort Saskatchewan, Alberta. Shortchange your teeth on the time they deserve, and you’re bound to leave plaque behind.

A study at Newcastle University’s School of Dental Sciences in England showed that two-thirds of patients with gum disease failed to brush their teeth for the full two minutes – even after their dentists advised them to do so. Try using an electric toothbrush with a timer, or even just the second hand of your watch. You might be surprised at how little time you’re devoting to the important task of cleaning your mouth.

2. Forgetting all the corners

Another common mistake: Leaving out certain parts of your mouth while your toothbrush makes the rounds. Brushing should be an equal opportunity activity, targeting the inside, outside and chewing surfaces of your teeth, as well as your gums, your tongue and the roof of your mouth. Often, spots that take more dexterity to reach, like the inside of your teeth, don’t get cleaned. Other areas are skipped out of habit, or because you aren’t paying enough attention. “People aren’t consciously thinking of how they’re brushing their teeth. It becomes lazy,” says Blatz.

When it comes to the pressure you apply when you brush, do you assume more is better? Not so – brushing too aggressively is another common problem seen among dental patients. Aggressive brushing can actually cause the gum tissue to come away from your teeth, leading to receding gums. It can also result in tooth sensitivity or even loose teeth. So lighten up!

The Canadian Dental Association recommends that you make sure your toothbrush is soft as well. Soft bristles will be gentle on your teeth and will flex more under the gum line, which means a better, more thorough cleaning.

Be sure to buy soft or ultrasoft brushes to minimise damage. Lenchner warns, though, that even softbristled toothbrushes can cause abrasions if used incorrectly . “Electric toothbrushes are great tools if they help you brush longer and get you to the right places,” Lenchner says. If your dentist gives you a special brush for cleaning implants or crowns, only use it as directed so you don’t disrupt proper gum growth.

If brushing your teeth was an Olympic event, how do you think you’d be rated by the judges? If you’re brushing in long, sideways sweeps from your back teeth to your front and back again, you wouldn’t score well.

Concentrate instead on small areas at a time, brushing gently in a circular motion. At the gum line, keep your bristles at a 45-degree angle and brush away from the gums.

6. You have the wrong

Baking soda toothpastes are good at getting stains out because they are abrasive -but that also means they’re hard on enamel. It’s a trade off that might not be worth it. As for whitening toothpastes, Lenchner says that to his knowledge they don’t hurt your teeth.

Too much toothpaste won’t harm your teeth. But it might mean you won’t brush long enough, if you don’t like the feeling of a mouth full of foam.

You only need enough of the stuff to cover the length of your toothbrush. More toothpaste doesn’t lead to a better clean – it’s what you do with it that counts, says the American Dental Association. “For children, a small swipe on a toothbrush is enough,” says Blatz. “And for adults, a pea-sized or marble-sized amount, but no more than that,” she says.

8. You don’t rinse after

Effective brushing and flossing unbind bacteria-laden plaque from the surface of teeth. Rinsing afterward is a key step to make sure that bacteria leave your mouth for good. Swish with a germ-killing, alcohol-free mouthwash, or use a fluoride rinse to strengthen and fortify tooth enamel and prevent cavities. If you don’t have mouthwash, a good rinse-and-spit with water is better than nothing.