The Sundarbans is the largest single block of tidal halophytic mangrove forest in the world.The Sunderbans is a UNESCO World Heritage Site covering parts of Bangladesh and India. The Sundarban forest lies in the vast delta on the Bay of Bengal formed by the super confluence of the Padma, Brahmaputra and Meghna rivers across southern Bangladesh. The seasonally flooded Sundarbans freshwater swamp forests lie inland from the mangrove forests on the coastal fringe. The forest covers 10,000 km2. of which about 6,000 are in Bangladesh. It became inscribed as a UNESCO world heritage site in 1997. The Sundarbans is estimated to be about 4,110 km², of which about 1,700 km² is occupied by waterbodies in the forms of river, canals and creeks of width varying from a few meters to several kilometers. 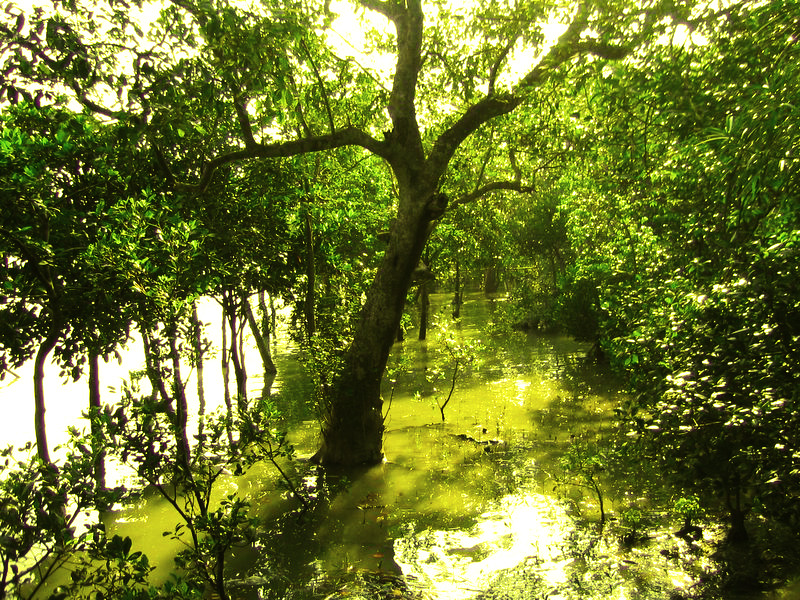 The Sundarbans is intersected by a complex network of tidal waterways, mudflats and small islands of salt-tolerant mangrove forests. The interconnected network of waterways makes almost every corner of the forest accessible by boat. The area is known for the eponymous Royal Bengal Tiger (Panthera tigris tigris), as well as numerous fauna including species of birds, spotted deer, crocodiles and snakes. The fertile soils of the delta have been subject to intensive human use for centuries, and the ecoregion has been mostly converted to intensive agriculture, with few enclaves of forest remaining. The remaining forests, taken together with the Sundarbans mangroves, are important habitat for the endangered tiger. Additionally, the Sundarbans serves a crucial function as a protective barrier for the millions of inhabitants in and around Khulna and Mongla against the floods that result from the cyclones. The Sundarbans has also been enlisted among the finalists in the New7Wonders of Nature.