What is TDS Meter ?

Total dissolved solids (TDS) is a measure of the combined content of all inorganic and organic substances contained in a liquid in molecular, ionized or micro-granular (colloidal sol) suspended form. Generally the operational definition is that the solids must be small enough to survive filtration through a filter with two-micrometer (nominal size, or smaller) pores. Total dissolved solids are normally discussed only for freshwater systems, as salinity includes some of the ions constituting the definition of TDS. The principal application of TDS is in the study of water quality for streams, rivers and lakes, although TDS is not generally considered a primary pollutant (e.g. it is not deemed to be associated with health effects) it is used as an indication of aesthetic characteristics of drinking water and as an aggregate indicator of the presence of a broad array of chemical contaminants. 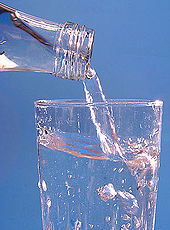 Primary sources for TDS in receiving waters are agricultural and residential runoff, leaching of soil contamination and point source water pollution discharge from industrial or sewage treatment plants. The most common chemical constituents are calcium, phosphates, nitrates, sodium, potassium and chloride, which are found in nutrient runoff, general stormwater runoff and runoff from snowy climates where road de-icing salts are applied. The chemicals may be cations, anions, molecules or agglomerations on the order of one thousand or fewer molecules, so long as a soluble micro-granule is formed. More exotic and harmful elements of TDS are pesticides arising from surface runoff. Certain naturally occurring total dissolved solids arise from the weathering and dissolution of rocks and soils. The United States has established a secondary water quality standard of 500 mg/l to provide for palatability of drinking water.

How to Measure TDS level ?

The two principal methods of measuring total dissolved solids are gravimetry and conductivity. Gravimetric methods are the most accurate and involve evaporating the liquid solvent and measuring the mass of residues left. This method is generally the best, although it is time-consuming. If inorganic salts comprise the great majority of TDS, gravimetric methods are appropriate.

Electrical conductivity of water is directly related to the concentration of dissolved ionized solids in the water. Ions from the dissolved solids in water create the ability for that water to conduct an electrical current, which can be measured using a conventional conductivity meter or TDS meter. When correlated with laboratory TDS measurements, conductivity provides an approximate value for the TDS concentration, usually to within ten-percent accuracy.

The relationship of TDS and specific conductance of groundwater can be approximated by the following equation:

where TDS is expressed in mg/L and EC is the electrical conductivity in microsiemens per centimeter at 25 °C. The correlation factor ke varies between 0.55 and 0.8.

Water can be classified by the amount of TDS per liter: