The Guinness world record for the Tallest hotel was set by the JW Marriott Marquis Hotel Dubai, UAE, formerly known as Emirates Park Towers Hotel & Spa, which is standing at 355.35 m (1,165.84 ft) from ground level to the top of its mast.

Despite living in the shadow of the Burj Khalif however, the JW Marriott Marquis Hotel Dubai is only 26 metres short of the Empire State Building in New York.

It is also Dubai’s first world-class convention and business destination hotel, filling a long identified gap in the market where groups, meetings and conventions of up to 1,000 people can meet, sleep and dine under one roof, in one location.

With the first tower open, the hotel comprises 14 food and beverage outlets, rooftop bars, a business center, conference halls and meeting rooms, an extensive banquet hall, a 3,700 m2 (40,000 sq ft) spa and health club, as well as retail outlets, a swimming pool, and a gymnasium.

This project, owned by The Emirates Group, was originally conceived as a single, 350 m (1,150 ft), 77-storey tower intended to be completed in 2008 and built alongside the Sheikh Zayed Road. However, its design and location had to be changed because of the construction of a creek extension belonging to the Business Bay megaproject. The new twin-tower design was launched at the Arabian Travel Market in Dubai in 2006 with 395 m (1,296 ft) towers. However, the shape of the towers was modified and the height decreased to 355 m (1,165 ft) in a later redesign. The concrete structural frames of both towers topped out in April 2010. As of April, 2011 the spires on both towers have been added while the outer structure of the both towers has almost been completed. The buildings were completed in 2012, surpassing the Rose Rayhaan by Rotana as the world’s tallest hotel. 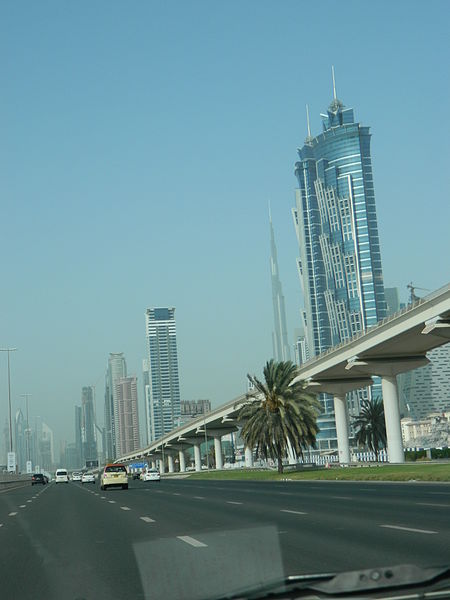