The Metéora is one of the largest and most important complexes of Eastern Orthodox monasteries in Greece, second only to Mount Athos. The six monasteries are built on natural sandstone rock pillars, at the northwestern edge of the Plain of Thessaly near the Pineios river and Pindus Mountains, in central Greece. The nearest town is Kalambaka. The Metéora is included on the UNESCO World Heritage List under criteria I, II, IV, V and VII.

The Theopetra caves 5 kilometres (3.1 mi) south of Meteora had inhabitants fifty millennia ago. The oldest known example of a man-made structure was found within a prehistoric cave in central Greece, according to the Greek culture ministry. The structure is a stone wall that blocked two-thirds of the entrance to the Theopetra cave near Kalambaka on the north edge of the Thessalian plain. It was constructed 23,000 years ago, probably as a barrier to cold winds. “An optical dating test, known as Optically Stimulated Luminescence, was applied on quartz grains nested within the stones. We dated four different samples from the sediment and soil materials, and all provided identical dates,” Nikolaos Zacharias, director of the laboratory of archaeometry at the University of Peloponnese, told Discovery News. According to a statement by the ministry of culture, “the dating matches the coldest period of the most recent ice age, indicating that the cavern’s inhabitants built the stone wall to protect themselves from the cold.” Excavated since 1987, the Theopetra cave is well known to palaeontologists as it was used and inhabited continuously from the Palaeolithic period onwards (50,000 to 5,000 years ago). 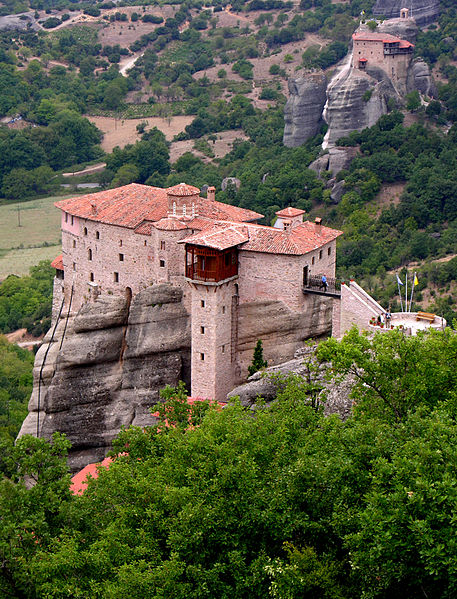 In the 9th century, an ascetic group of hermit monks moved up to the ancient pinnacles.

They were the first people to inhabit Metéora. They lived in hollows and fissures in the rock towers, some of which reach 1800 ft (550m) above the plain. This great height, combined with the sheerness of the cliff walls, kept away all but the most determined visitors. Initially the hermits led a life of solitude, meeting only on Sundays and special days to worship and pray in a chapel built at the foot of a rock known as Dhoupiani. As early as the 11th century AD hermit monks were believed to be living among the caves and cutouts in the rocks. The exact date of the establishment of the monasteries is unknown. By the late 11th and early 12th centuries, a rudimentary monastic state had formed called the Skete of Stagoi and was centered around the still-standing church of Theotokos (mother of God). By the end of the 12th century, an ascetic community had flocked to Metéora. Studies suggest that the pinnacles were formed about 60 million years ago during the Paleogene Period. Weathering and earthquakes then shaped them into their present shape. Kalampaka (also spelled Kalabaka) is a town of 12 000 citizens and is situated on the foot of the most extraordinary Meteora rocks. A big part of the daily life of the locals is centered on Tourism, hence the generous number of hotels, restaurants, shops and cafes. Kalampaka is at times underestimated as merely sharing the glory of the Meteora pinnacles that spectacularly rise at the near background. However, it is a town with a very rich and long history in itself.

Kalampaka is 350 km away from Athens, 238 km away from Thessaloniki and 146 km from Volos. The archaeological sites of Delphi and Dion are 3 hrs and 2 hrs away respectively. For sea adventures, the village of Achillion is 2.5 hrs away, where you can catch a boat to the island of Skiathos. Alternatively, take a trip to the “Golden Beach” of Katerini which is 2hrs away.

A Greek inscription on the wall of one of the town’s oldest churches (Saint John the Baptist) testifies the existence of an ancient Greek settlement under the name Eginio. Relics of an ancient Greek temple – probably of god Apollo – have been incorporated in the wall of the town’s oldest and most renowned 10th-century church, dedicated to Virgin Mary. Historical records refer to the town’s Byzantine name as Stagi, when it had become a significant center of the Byzantine Empire.

For the lovers of mountains, Greece’s highest mountain, Olympus, is also only 2 hours away.

Beside the Pindos Mountains, at the western region of the Thessaly plain in the middle of northern Greece, these sandstone rocks rise from the ground. The rocks are composed of a mixture of sandstone and conglomerate. They were formed about 60 million years ago. A series of earth movements pushed the seabed upwards, creating a high plateau and causing many fault lines to appear in the thick layer of sandstone.