The Georgia Aquarium holds more than 8.5 million gallons (31,000 cubic meters) of salt and fresh water and displays up to 120,000 animals that represent 500 species – setting the new world record for the Largest Aquarium. 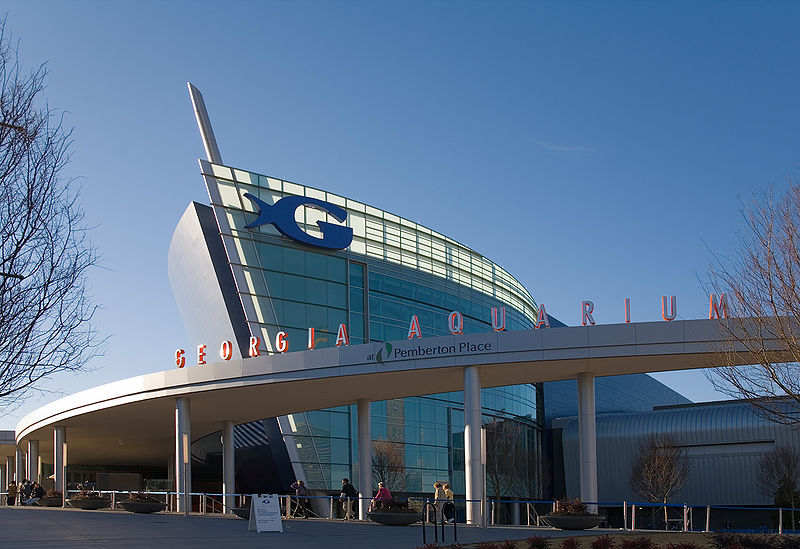 The World’s Largest Aquarium attraction, which opened in 2005, holds more than 8 million gallons of water in its exhibits. That includes the stunning 6-million-gallon Ocean Voyager tank. A new dolphin exhibit slated to open in the fall adds another 2 million gallons, cementing the title. Designed around the whale shark exhibit, the Georgia Aquarium is the only institution outside of Asia to house the largest living fish species. It is also one of only two aquariums in the U.S. to exhibit Great Hammerhead sharks, and it joined the rank of only four aquariums worldwide that display manta rays. Changing exhibitions focus on themes like “Titanic Aquatic” and “Planet Shark: Predator or Prey.” The aquarium holds the title as worlds largest since the time of its opening in November 2005. In November 2001 Bernard Marcus announced his vision of presenting Atlanta with an aquarium that would encourage both education and economic growth. After visiting 56 aquariums in 13 countries with his wife Billi, he donated $250 million toward what was to become Georgia Aquarium. Corporate contributions totaling an additional $40 million allowed the Aquarium to open debt free.

Jeff Swanagan, the Aquarium’s founding president and executive director until 2008 is largely credited with the creation of the aquarium, from the design of the structure to the procurement of animals for the exhibits.

The Aquarium is in downtown Atlanta on land donated by The Coca-Cola Company, just north of Centennial Olympic Park and near the Georgia Dome, the Georgia World Congress Center, Philips Arena, and CNN Center. Its blue metal-and-glass exterior is meant to evoke a giant ark breaking through a wave. The world’s largest when it opened in November 2005, the Aquarium encompasses 550,000 square feet (5.1 ha; 13 acres) of covered space; its tanks hold 8,000,000 US gallons (30,000 m3) of fresh and salt water. The 16,400 square feet (1,520 m2) Oceans Ballroom accommodates 1100 seated guests (1600 standing) and features two 10 by 28 feet (3.0 m × 8.5 m) windows into whale shark and beluga whale exhibits.

After 27 months of construction the Aquarium opened on November 21, 2005, with 60 animal habitats. Though the non-profit Aquarium’s admission charges are among the highest in the United States, attendance has far exceeded expectations, with one million visitors in the first hundred days, three million by August 2006, five million by May 2007, and ten million by June 2009. The Aquarium is part of the Smithsonian Affiliations program.