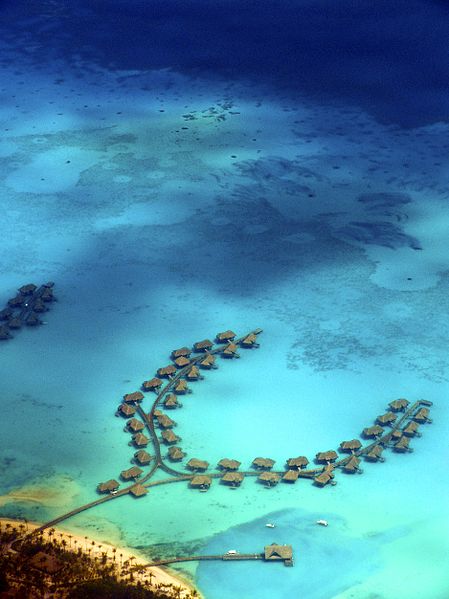 The Ultimate Dream Island Nothing says South Seas escape more than Bora-Bora. This is the very island that had travelers hocking their worldly possessions for a romantic sojourn: nights in the island’s over-water bungalows that belly up against its dreamy lagoon and days spent on the beach, nearly always in shadow of the mythically sculpted Mount Otemanu. Then there are the beautiful and friendly Polynesians.

Bora Bora is an island in the Leeward group of the Society Islands of French Polynesia, an overseas collectivity of France in the Pacific Ocean. The island, located about 230 km (140 mi) northwest of Papeete, is surrounded by a lagoon and a barrier reef. In the centre of the island are the remnants of an extinct volcano rising to two peaks, Mount Pahia and Mount Otemanu, the highest point at 727 m

Bora Bora is a major international tourist destination, famous for its aqua-centric luxury resorts. The major settlement, Vaitape, is on the western side of the main island, opposite the main channel into the lagoon. Produce of the island is mostly limited to what can be obtained from the sea and the plentiful coconut trees, which were historically of economic importance for copra. According to a census performed in 2008, the permanent population of Bora Bora is 8,880.