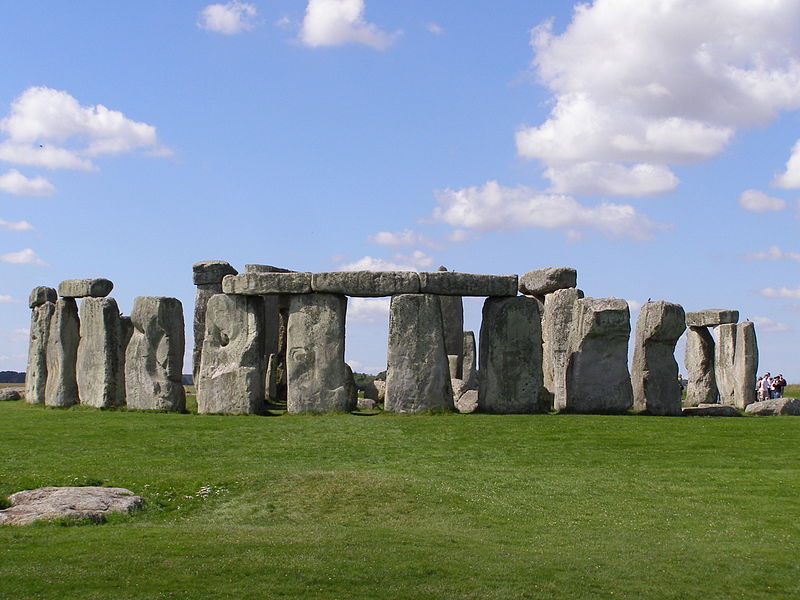 Stonehenge is a circle of 17 upright stones called sarsens which stands on salisbury Plain in Southwest England. It is a prehistoric monument in the English county of Wiltshire, about 2 miles (3.2 km) west of Amesbury and 8 miles (13 km) north of Salisbury. One of the most famous sites in the world, Stonehenge is the remains of a ring of standing stones set within earthworks. It is in the middle of the most dense complex of Neolithic and Bronze Age monuments in England, including several hundred burial mounds.

Archaeologists believe it was built anywhere from 3000 BC to 2000 BC, as described in the chronology below. Radiocarbon dating in 2008 suggested that the first stones were raised between 2400 and 2200 BC, whilst another theory suggests that bluestones may have been raised at the site as early as 3000 BC .

The surrounding circular earth bank and ditch, which constitute the earliest phase of the monument, have been dated to about 3100 BC. The site and its surroundings were added to the UNESCO’s list of World Heritage Sites in 1986 in a co-listing with Avebury Henge. It is a national legally protected Scheduled Ancient Monument. Stonehenge is owned by the Crown and managed by English heritage. Stonehenge is the only circle in the world with lintels acros the top of the stones.

Archaeological evidence found by the Stonehenge Riverside Project in 2008 indicates that Stonehenge could have been a burial ground from its earliest beginnings. The dating of cremated remains found on the site indicate that deposits contain human bone from as early as 3000 BC, when the ditch and bank were first dug. Such deposits continued at Stonehenge for at least another 500 years. The site is a place of religious significance and pilgrimage in Neo-Druidry.