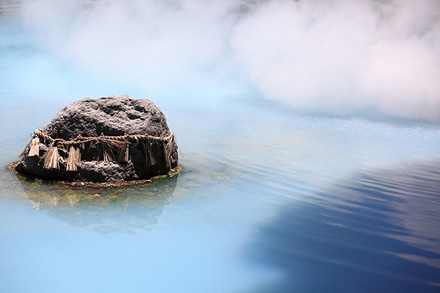 Beppu is a town located between the sea and the mountains. The city was founded on April 1, 1924, and is famous for its onsen (hot springs).

Beppu contains eight major geothermal hot spots, which are sometimes referred to as the “eight hells of Beppu”. Six of these are located in the Kannawa district, and two in the more remote Shibaseki district. Beppu is also divided into eight major hot spring areas known as Beppu Hattō.

Beppu is part of the course of the annual Beppu-Ōita Marathon, which traces a path between Beppu and its neighbouring city of Ōita. The competition has been held every year since 1952 and is classed as an IAAF Silver Label road race.

Takasakiyama Monkey Park is located 10 minutes from the centre of Beppu by bus. The park is home to more than 1500 Japanese macaques.

Kijima Kogen is a resort which includes an 18-hole golf course and hotel alongside an amusement park. It is located on a plateau en route to Yufuin. Beppu has not only usual hot springs but some sand and foot baths as well. One famous spot is “Beppu Kaihin Sunayu, Ashiyu”, (”Beppu marine beach sand bath and foot bath”). It is 15 minutes by bus from Beppu station, on Route 10.

Beppu Park is located in the center of the city, a 15-minute walk from Beppu Station.

Beppu Fireworks Festival, held in late July, is one of the biggest fireworks displays in Oita. Five thousand fireworks are set off from boats floating on Beppu Bay.