The Great Blue Hole is a large submarine sinkhole off the coast of Belize. It lies near the center of Lighthouse Reef, a small atoll 70 km (43 mi) from the mainland and Belize City. The hole is circular in shape, over 300 m (984 ft) across and 124 m (407 ft) deep. 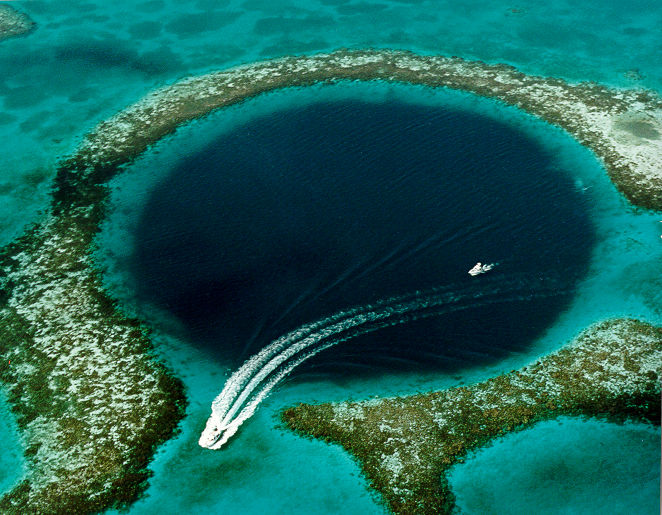 It was formed during several episodes of quaternary glaciation when sea levels were much lower – the analysis of stalactites found in Great Blue Hole shows that formation took place 153,000, 66,000, 60,000, and 15,000 years ago.

As the ocean began to rise again, the caves were flooded. The Great Blue Hole is a part of the larger Belize Barrier Reef Reserve System, a World Heritage Site of the United Nations Educational, Scientific and Cultural Organization (UNESCO).

This site was made famous by Jacques-Yves Cousteau, who declared it one of the top ten scuba diving sites in the world. In 1971, he brought his ship, the Calypso, to the hole to chart its depths. Investigations by this expedition confirmed the hole’s origin as typical karst limestone formations, formed before rises in sea level in at least four stages, leaving ledges at depths of 21 m (69 ft), 49 m (161 ft), and 91 m (299 ft). Stalactites were retrieved from submerged caves, confirming their previous formation above sea level. Some of these stalactites were also off-vertical by 5° in a consistent orientation, thus indicating that there had also been some past geological shift and tilting of the underlying plateau, followed by a long period in the current plane.

Initial measured depth of Great Blue Hole was 125 m (410 ft) which is the most often cited depth up to this day. An expedition by the Cambrian Foundation in 1997 measured the hole’s depth as 124 m (407 ft)at its deepest point. This difference in measurement can be explained by ongoing sedimentation or by imprecision in measurements. The purpose of this expedition was the collection of core samples from the floor of the Blue Hole and documentation of the cave system. To accomplish these tasks, all of the divers had to be certified in cave diving and mixed gases.

This is a popular spot amongst recreational scuba divers, who are lured by the opportunity to dive in crystal-clear water and meet several species of fish, including giant groupers, nurse sharks and several types of reef sharks such as the Caribbean reef shark and the Blacktip shark. Other species of sharks, like the bull shark and hammerheads, have been reported there, but are not regular sightings. Usually, dive trips to the Great Blue Hole are full-day trips, which include one dive in the Blue Hole and two further dives in nearby reefs. Recently diving has also been offered from the island Long Caye in the Lighthouse Reef only a couple of miles away from the Great Blue Hole. They offer 2 dives in the Blue Hole: North side and South side.