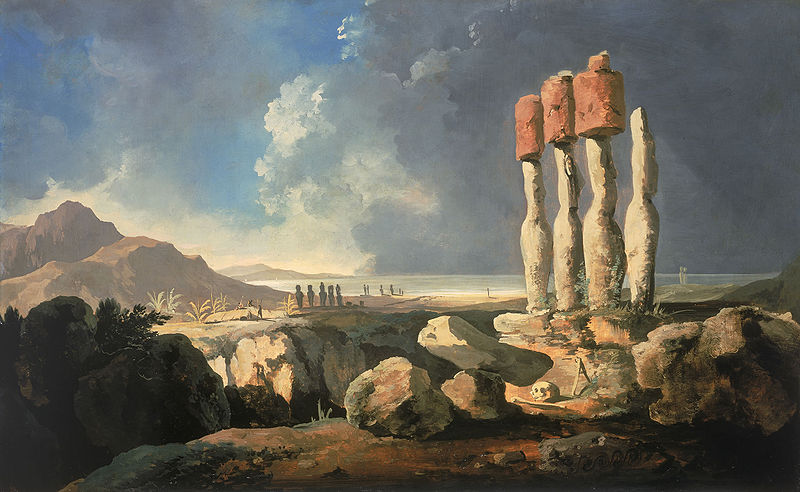 Easter Island is a Polynesian island in the southeastern Pacific Ocean, at the southeastern most point of the Polynesian Triangle. A special territory of Chile that was annexed in 1888, Easter Island is famous for its 887 extant monumental statues, called moai, created by the early Rapanui people. It is a UNESCO World Heritage Site, with much of the island protected within Rapa Nui National Park. In recent times the island has served as a warning of the cultural and environmental dangers of exploitation. Ethnographers and archaeologists also blame diseases carried by European sailors and Peruvian slave raiding of the 1860s for devastating the local peoples.

Easter Island is one of the most remote inhabited islands in the world. The nearest inhabited land (50 residents) is Pitcairn Island at 2,075 kilometres (1,289 mi), and the nearest continental point lies in central Chile, at 3,512 kilometres  (2,182 mi).

The island belongs to Chile’s Valparaíso Region and more specifically, is the only one commune of the Province Isla de Pascua.

The nearest continental point lies in central Chile near Concepción, at 3,512 kilometres (2,182 mi). Easter Island’s latitude is similar to that of Caldera, Chile, and it lies 3,510 km (2,180 mi) west of continental Chile at its nearest point (between Lota  and Lebu in the Biobío Region). Isla Salas y Gómez, 415 km (258 mi) to the east, is closer but is uninhabited. Archipelago Tristan da Cunha in southern Atlantic competes for the title of the most remote island, lying 2,430 kilometres (1,510 mi) from Saint Helena  island and 2,816 kilometres (1,750 mi) from South African coast.

Easter Island is a volcanic high island, consisting mainly of three extinct coalesced volcanoes: Terevaka(altitude 507 metres) forms the bulk of the island, while two other volcanoes, Poike and Rano Kau, form the eastern and southern headlands and give the island its roughly triangular shape. Lesser cones and other volcanic features include the crater Rano Raraku, the cinder cone Puna Pauand many volcanic caves including lava tubes. Poike used to be a separate island until volcanic material from Terevaka united it to the larger whole. The island is dominated by hawaiite and basalt flows which are rich in iron and show affinity with igneous rocks found in the Galápagos Islands.

Easter Island and surrounding islets such as Motu Nui and Motu Iti form the summit of a large volcanic mountain rising over 2,000 metres (6,600 ft) from the sea bed. The mountain is part of the Sala y Gómez Ridge, a (mostly submarine) mountain range with dozens of seamounts. The range begins with Pukao and next Moai  two seamounts to the west of Easter Island, and extends 2,700 km (1,700 mi) east to the Nazca Ridge. The ridge was formed by the Nazca Plate floating over the Easter hotspot. The movement of Nazca and formerly the Farallon Plate over the hotspot has created a long underwater ridge, the Nazca Ridge, whose eastern end is being subducted under Peru. Only at Easter Island, its surrounding islets and Salay Gómez does the Sala y Gómez Ridge form dry land.

Pukao, Moai and Easter Island were formed in the last 750,000 years and are the ridge’s youngest islands. The most recent eruption was a little over 100,000 years ago.

In the first half of the 20th century, steam reportedly came out of the Rano Kau crater wall. This was photographed by the island’s manager, Mr. Edmunds. According to geologists the last volcanic activity on the island occurred 10,000 years ago.