The Dead Sea also called the Salt Sea, is a salt lake bordering Jordan to the east and Israel and the West Bank to the west. Its surface and shores are 423 metres (1,388 ft) below sea level,Earth’s lowest elevation on land. The Dead Sea is 377 m (1,237 ft) deep, the deepest hypersaline lake in the world. With 33.7% salinity, it is also one of the world’s saltiest bodies of water, though Lake Assal (Djibouti), Garabogazköl and some hypersaline lakes of the McMurdo Dry Valleys in Antarctica (such as Don Juan Pond) have reported higher salinities. It is 8.6 times saltier than the ocean. This salinity makes for a harsh environment in which animals cannot flourish, hence its name. The Dead Sea is 67 kilometres (42 mi) long and 18 kilometres (11 mi) wide at its widest point. It lies in the Jordan Rift Valley, and its main tributary is the Jordan River. 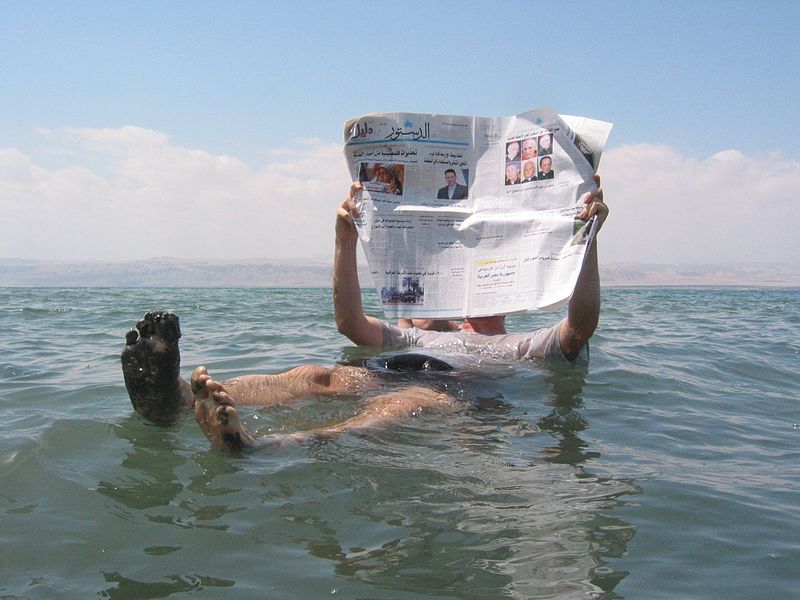 The Dead Sea has attracted visitors from around the Mediterranean basin for thousands of years. Biblically, it was a place of refuge for King David. It was one of the world’s first health resorts (for Herod the Great), and it has been the supplier of a wide variety of products, from balms for Egyptian mummification to potash for fertilizers. People also use the salt and the minerals from the Dead Sea to create cosmetics and herbal sachets. In 2009, 1.2 million foreign tourists visited on the Israeli side. The Dead Sea is an endorheic lake located in the Jordan Rift Valley, a geographic feature formed by the Dead Sea Transform (DST). This left lateral-moving transform fault lies along the tectonic plate boundary between the African Plate and the Arabian Plate. It runs between the East Anatolian Fault zone in Turkey and the northern end of the Red Sea Rift offshore of the southern tip of Sinai.

The Jordan River is the only major water source flowing into the Dead Sea, although there are small perennial springs under and around the Dead Sea, forming pools and quicksand pits along the edges. There are no outlet streams.